Is Groupthink a Risky Business for Yours? 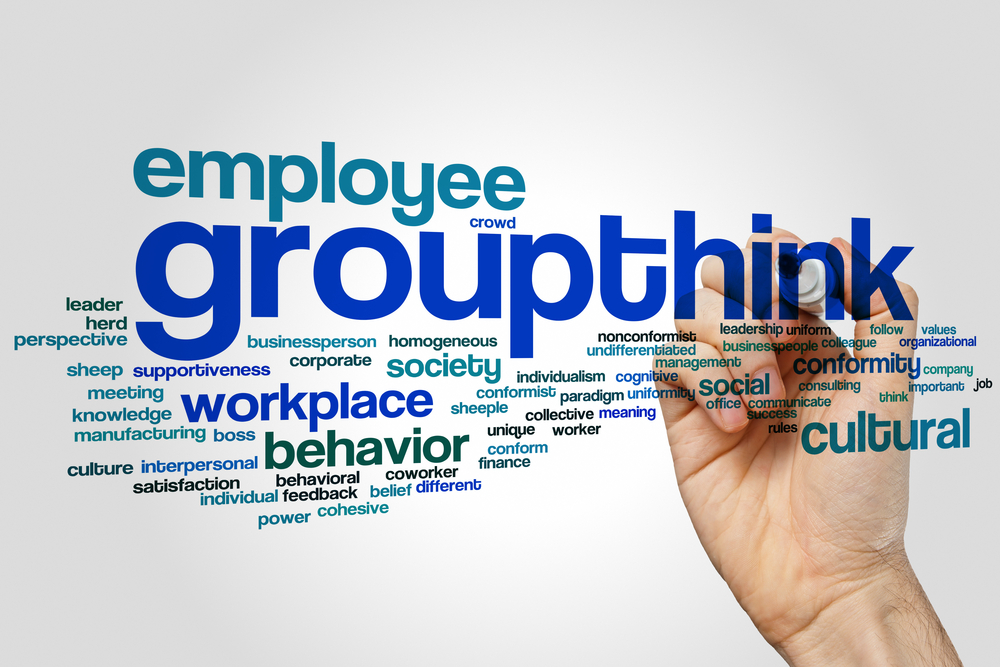 Reaching a harmonious consensus: it’s the holy grail of decision-making, right? But trying to get every person in the room to agree? Not always the best option. On paper, reaching a decision as a group is technically a fast, effective, democratic, and largely amicable way of getting something done—an attractive prospect in a time-constrained world. In practice, decision by committee only works if every single individual in the room values debate, critical analysis, and the sharing of ideas and opinions as highly as harmony and conformity. A tall order if ever there was one.

I want to be absolutely clear: we’re talking specifically about the groupthink phenomenon here, which The Cambridge English Dictionary defines as ‘the process by which bad decisions are made by a group because its members do not want to express opinions, suggest new ideas, etc., that others may disagree with.’

Humans are by nature, social beings. We’re hardwired with a basic instinct to belong and so actively seek acceptance from others, particularly in a group situation. Few of us relish the prospect of telling the boss that the critical decision on the table is based on an idea that’s flawed at best. But if everyone else in the group is voicing their approval of said idea, being the one voice of dissent is, well, scary. It means disturbing the harmony of the group and possibly being rejected by it, a double whammy that’s directly at odds with our genetic and social programming.

That’s when groupthink rears its head.

History is littered with destructive consequences of groupthink, including the U.S. military’s refusal to accept the likelihood of the Japanese military bombing Pearl Harbour despite clear intelligence to the contrary. And let’s not forget the Bay of Pigs fiasco. I could go on. And on.

The Emperor’s New Clothes is arguably the most famous cautionary tale on the potential dangers of groupthink.

“What happened to the emperor isn’t just the stuff of fairy tales; it’s the real-life experience of many high-level leaders who surround themselves with people who won’t report negative feedback for fear of repercussions. As leaders rise through the ranks, the less honest feedback they receive. High-level executives can become isolated and not really understand the reality of their situation. Such leaders may not walk down the street naked, but lack of information can lead to poor decisions and missed opportunities.” — Bill George, Harvard Business School Professor and former Medtronic CEO.

Let’s not forget that it was a single—and seemingly insignificant—voice in a crowd that highlighted the obvious, embarrassing truth:

“But he isn’t wearing anything at all!”

Taking the middle ground is a common default position in a group situation. A consensus based on the standpoint between two opposing views may not set us on a path we consider to be ‘wrong’ but in reaching a ‘safe’ consensus, it’s likely to keep us on the same path, which in turn stifles innovation and creates an environment where ‘good enough’ becomes the goal. And that’s certainly not what Steve Wozniak had in mind when he engineered a user-friendly personal computer back in 1975—on his own, in his garage—and shared his creation with Steve Jobs afterwards. It wasn’t a creation by committee.

So, here’s the billion-dollar question: is it actually possibly to innovate by engaging in ‘good’ group decision-making processes and practices?

Well, first we need to be open to what’s being said by those involved, analyse the potential impacts of those ideas in the moment, and make sound judgements on what fits and what doesn’t, what’s realistically achievable and what isn’t. To do all that, we need to give everyone a voice so that ideas are shared and fully explored.

That’s where Sharp Surveys comes in.

It helps you shape your own decision-making process by giving everyone an equal opportunity to speak and share their knowledge, opinions, ideas and experiences via a simple user interface. It provides you with a platform on which leaders can be challenged constructively and effectively in a non-confrontational setting. The ability to have live interactions at an early stage—long before ideas become entrenched—means you can easily view and assess early ideas quickly, and then decide what should be explored further and what can be disregarded.

Instant feedback allows everyone in the group to see where there’s genuine consensus, and gives leaders the insights they need to draw conclusions about the best way to move forward.

Sharp Surveys handles the difficult, time-consuming process of recording and analysing user data for you.

Most importantly, Sharp Surveys analytics gives you the power to interpret and review large amounts of data. And ensure the decisions you reach are based on what the group actually thinks. Not groupthink.